Supply and Demand for Labor: How the Automation Age Enables the Barbell Economy

Supply and Demand for Labor: How the Automation Age Enables the Barbell Economy

A supply-demand thought experiment uses machinists as an example to show that advanced automation and robotics tend to reduce industry’s demand for workers despite increased production. The analysis continues to show that the same phenomena also generate a “barbell economy” that separates those workers into a small group of “winners” who receive increased compensation and a larger group of “losers” who see their compensation either reduced or eliminated. These results are supported by employment data and the Job Quality Index (JQI).

The Age of Automation is not comparable to the Industrial Revolution of the eighteenth and nineteenth centuries for at least two reasons: in 1800, there was a pent-up demand for clothing for which there is no parallel today (to be examined in subsequent analyses); and, today’s automation is radically changing the nature of humans’ interactions with the tools of production.

The Industrial Revolution generally required one person to operate one machine. This enhanced an employee’s value and supported the creation of the middle class as we know it. In contrast, the Automation Age reduces the number of people required per machine and then bifurcates tasks into high-value and low-value components. This leads to job loss in general and especially in the “good-paying” middle of the wage range. That loss of middle-income jobs attacks the middle class at its economic center. 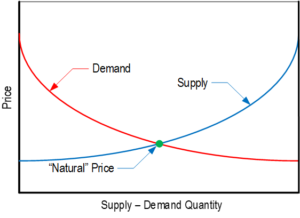 A posting on a YouTube channel, Economics Explained,1 makes the point that labor is a commodity that obeys the basic microeconomic concept of supply and demand, i.e., as the price goes up, so does supplywhile demand drops as the price rises.

The result of this natural economic behavior is that almost everything has a natural price point where supply equals demand.

Reduction in the General Demand for Labor.

Employers hire employees to make a profit on the value of the employees’ work. That profitability is heavily influenced by the specific employee’s productivity: an employee who produces more value is worth more to the employer and can command a higher salary.

The advances of the Industrial Revolution, largely power from steam and mechanization, vastly increased the quantity of a product that a single person could produce. Henry Ford’s introduction of the assembly line allowed an employee to do one job with one tool in one place while the item being manufactured moved. These advances increased the human employee’s value because each machine or function required a human operator. In essence, mechanical systems magnified the value of each human brain.

Using the Machining Process as a Thought Experiment.

Machinists are an example of this magnification of employee value for both the employer and the employee. (D. Conrad-University of Cincinnati, personal communication, January 4, 2020)

The human-controlled machines (e.g., drill press, lathe, mill) of the Industrial Revolution required a machinist to operate each machine for it to function. Each blank or partially completed workpiece would come to the machine and, working from a drawing, the machinist would make measurements of it, set the machine up, determine how to use the machine to do the work required, install the workpiece in the machine, and use manual controls to operate the machine. This required significant machinist skills, including basic mathematics (i.e., addition and subtraction), understanding specific machine characteristics (such as backlash from an imperfect drive system), and precision measurement techniques.

Differences in the complexity of, or the precision required by, each step allowed a wide range of skill levels to participate in the manufacture of complex parts and made each machinist operating a machine valuable in proportion to his or her contribution to the whole. This created an industrial environment in which every skill level from apprentice to master could support one or more steps in the production process.

Early versions of numerical control (NC) machining were introduced in the 1940s.

NC technology created a new job, that of programmer. The programmer planned the machine’s movements and recorded them in a numerical form on a punched paper tape. The tape was then fed into an automated system that controlled the machine’s motion. This allowed the machinist to focus on the other aspects of the work (e.g., installing the workpiece in the machine, making required measurements at different stages of production, changing tools), increased the speed with which the machine did the work, and minimized the risk of errors, especially late in the machining process.

Its relatively low level of sophistication limited NC machining functionality. Programming a circle, radius, or angle was sufficiently complex to be impractical. The cost of programming made using manual techniques attractive for small lot sizes.

However, the machining program was a software product that, once perfected, could be reproduced and reused for a large number of parts and even across multiple machines of the same type at almost zero additional cost. The programmers’ work thus had higher value than the machinists, and programmers could command a higher salary.

NC machines began to be supplanted by computer numerical control (CNC) machines around 1975. This advanced technology included four major features: electronic media replaced the paper tape; the level of automation was significantly increased by adding the ability to change tools automatically; closed-loop control made much of the machines’ operation independent of the operator while simultaneously improving part precision; and the programming systems were simplified through the development of G- and M-Code for CNC programming.

CNC machines break the machining task into three distinct operations: programming, machine setup, and basic operation. Each of these functions has its own combination of value and demand.

This new paradigm again changed the nature of machinists’ jobs.

The programmers’ role became more valuable because programs could address features such as angles and radii; be easily stored, reused, and modified; and take advantage of techniques such as “climb” cutting to improve machine performance while reducing tool wear. Some other operator tasks, such as dimensional checks, can be included in the program.

Machine setup became more complex because it includes installing the required tools and registering their location with the machines’ software, adjusting for factors such as tool wear, and the like.

Machine operation was significantly simplified. The operator only needs to clean the machine, install the workpiece, “push the button” to start the work, monitor the machine’s progress for signs of trouble, and remove the finished part when machining is complete. As a result, one operator can service more than one machine.

Modern systems combine computer-aided design (CAD) with computer-aided manufacturing (CAM) software and techniques to allow the programmer to use a computer to generate code faster and more efficiently. Programming has been pushed “upstream” to the designer of the part who can optimize features for manufacturing processes. Therefore, fewer programmers are needed because their work has been reduced to checking and fine-tuning the computer-generated code rather than writing it.

This analysis indicates that advanced robotics and automation reduce the demand for machinists through three separate, but reinforcing, factors: machine programming is being automated; machines are operated with reduced human interaction; and parts are produced faster with fewer defects. This is compatible with measurable economic data. The three graphs below, courtesy of the Federal Reserve Bank of Saint Louis, show that, while manufacturing output in the United States has generally grown for more than 30 years,2 the demand for manufacturing workers has declined,3 and over 30% of the machinist jobs that existed in 2000 had disappeared as of the third quarter of 2019.4* The timing of peak manufacturing employment, approximately 1980, roughly corresponds with the arrival of CNC machining. 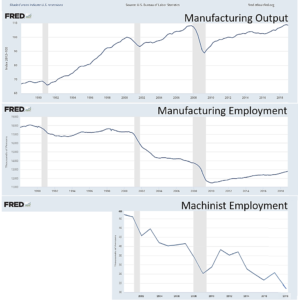 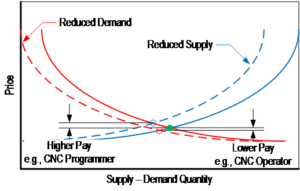 The Automation Age’s software-driven productivity improvements generally allow a more skilled employee (e.g., a programmer) to produce value across many machines simultaneously. The associated increase in both talent requirements (e.g., mathematics) and skillset reduces the number of qualified individuals who can compete for the work, which reduces the labor supply. The price of the commodity (i.e., programmer labor) increases, as shown in the graphic.

The job of the lower-paid operator is not magnified, however. Whether an operator tends one or ten CNC machines depends on the time required for the machine to complete a specific program, rather than operator skill. The required employee skill level is reduced because the employee does not provide the commands or perform the tasks that have been automated. This results in an increase in the number of people qualified for the job so the supply of labor increases. This moves the labor supply curve to the right, as shown in the graphic above, and tends to result in lower pay.

This change in the nature of the demand for machinist labor thus has four major characteristics:

The result of these changes is to hollow out the middle of an archetypal “good-paying job” by simultaneously reducing the demand for the skillset in general and splitting that skillset into two substantially different tasks: one of higher value and one of lower value. This is consistent with the creation of the “Barbell Economy” that is becoming the defining characteristic of the United States’ economy in the twenty-first century to date.7

The Job Quality Index (JQI),8 developed by researchers at the Program on the Law and Regulation of Financial Institutions and Markets of the Jack G. Clarke Institute at Cornell University Law School, uses the ratio of higher-wage/higher-hour jobs to lower-wage/lower-hour jobs to assess the health of the national job market. Their results appear to support broad conclusions based on the machinist example. They also include some generalizations about the recent evolution in the job market, as quoted below:

“Historically, there has always been a significant concentration of labor in lower quality jobs. Over the past three decades, however, this concentration has significantly increased moving from a JQI level of 94.9 in 1990 to 79.0 as of July 2019. Put differently, low-wage/low-hours jobs constituted 52.7% of total P&NS positions in 1990 (Figure 1), while in the years since they have accounted for 63% of all P&NS [production and nonsupervisory] jobs created (Figure 2). 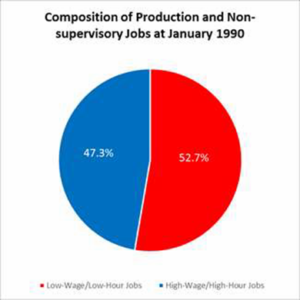 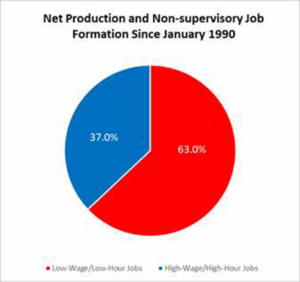 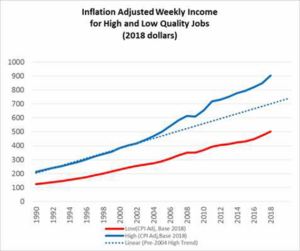 “Not only has the mix of high and low quality P&NS jobs changed in favor of the latter over the past three decades, but the gap in weekly income between the two groups has widened as well. As illustrated in Figure 3 (following page), on an inflation-adjusted basis in 2018 dollars, the gap has widened almost four-fold to $402 in 2018 from $104 in 1990. While this inflation-adjusted differential broadened somewhat from 1990 to 2002, the trend growth in weekly wages of high quality jobs broke dramatically higher beginning in 2004, with only minor disruption in escalation during the Great Recession.”

The Automation Age is not comparable to the Industrial Revolution because it is changing the nature of humans’ interaction with the tools of production through software that can be reused or adapted to new tasks without limit and at low cost. This bifurcates traditional tasks into high-value and low-value components. Where the Industrial Revolution’s ability to enhance an ordinary employee’s value led to the creation of the middle class as we know it, the Automation Age’s ability to bifurcate an employee’s work into high-value and low-value components is attacking the middle class at its center. A new and proactive social/political approach is needed to manage the workplace changes driven by advanced automation and robotics as a result.

1Economics Explained You Tube CA channel. (2019, July 17). The Economics of Automation | What Does Our Machine Future Look Like?

The author recognizes that this analysis would not have been possible without the technical help provided by David Conrad of the University of Cincinnati; the detailed reviews, comments, and suggestions provided by William Keksz, William Koch, and Ty Hardaway; and the editorial work done by Janis Tabor.

By Barney Gorin|2020-05-28T09:03:23-04:00January 11th, 2020|Economic Analysis, Technology Discussions|Comments Off on Supply and Demand for Labor: How the Automation Age Enables the Barbell Economy

About the Author: Barney Gorin