More than 90 years ago, John Maynard Keynes published “Economic Possibilities for our Grandchildren,” in which he argued that a bright economic future was very likely to be a bleak social one. In November of 2022, George Will used Keynes’ arguments to explain why social discourse has become very toxic (Why toxic politics thrives in an age of plenty). We made a similar argument in 2017 with our post “The Double Edged Sword” on this site in which we pointed out how “[f]amily names often show the importance of a person’s vocation: Smith; Baker; Weaver; Cartwright; Brewer; and Mason are but a few examples.”

Keynes discussion is sufficiently prescient to quote here at length.

Let us, for the sake of argument, suppose that a hundred years hence we are all of us, on the average, eight times better off in the economic sense than we are to-day. Assuredly there need be nothing here to surprise us.

Now it is true that the needs of human beings may seem to be insatiable. But they fall into two classes –those needs which are absolute in the sense that we feel them whatever the situation of our fellow human beings may be, and those which are relative in the sense that we feel them only if their satisfaction lifts us above, makes us feel superior to, our fellows. Needs of the second class, those which satisfy the desire for superiority, may indeed be insatiable; for the higher the general level, the higher still are they. But this is not so true of the absolute needs …

… [If] we look into the past-we find that the economic problem, the struggle for subsistence, always has been hitherto the primary, most pressing problem of the human race-not only of the human race, but of the whole of the biological kingdom from the beginnings of life in its most primitive forms.

Thus for the first time since his creation man will be faced with his real, his permanent problem-how to use his freedom from pressing economic cares, how to occupy the leisure, which science and compound interest will have won for him, to live wisely and agreeably and well.

Yet there is no country and no people, I think, who can look forward to the age of leisure and of abundance without a dread. For we have been trained too long to strive and not to enjoy. It is a fearful problem for the ordinary person, with no special talents, to occupy himself, especially if he no longer has roots in the soil or in custom or in the beloved conventions of a traditional society. To judge from the behaviour and the achievements of the wealthy classes to-day in any quarter of the world, the outlook is very depressing! For these are, so to speak, our advance guard-those who are spying out the promised land for the rest of us and pitching their camp there. For they have most of them failed disastrously, [emphasis added] so it seems to me-those who have an independent income but no associations or duties or ties-to solve the problem which has been set them.

For many ages to come the old Adam will be so strong in us that everybody will need to do some work if he is to be contented. We shall do more things for ourselves than is usual with the rich to-day, only too glad to have small duties and tasks and routines. But beyond this, we shall endeavour to spread the bread thin on the butter-to make what work there is still to be done to be as widely shared as possible.

Keynes, for all his genius, could not foresee the rise of a robotic economy in which software tools from specialized professional tools to Artificial Intelligence  would replace humans in professions ranging from operating the fry station in fast food restaurants to automating legal research. He had no way to see how technology can, and is, separating high-income professions from low-income ones by an ever widening gulf with machine production causing stagnating wages in lower-income job classes as described here in detail in 2020 as “Supply and Demand for Labor: How the Automation Age Enables the Barbell Economy.” He did, however, predict four of the six great questions AHiRE exists to help answer: 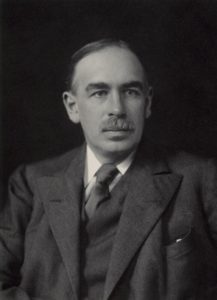