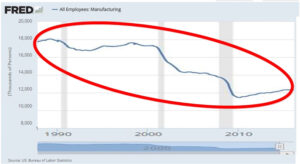 According to the Bureau of Labor Statistics, United States manufacturing employment rose from 1945 to a peak of about 20 million jobs in 1980. It then dropped by about 8 million, or 40%, from 1980 to 2015 while manufacturing output almost doubled. Doubling output while reducing labor by almost half was the result of automation and robotics. Technology increased human productivity in many jobs and eliminated humans in others.

The lost manufacturing jobs were the backbone of the economic success enjoyed by the Middle and Working classes from the end of WWII to 1980. They only required moderate skills and reliable attendance to produce very high value and they built much of our economy. Their loss has been devastating to the Middle and Working Class people who depended on them.

Thus the trucking industry is poised for a second great disruption when self-driving over the road trucks and local delivery systems replace millions of human drivers. This disruption will not just reduce the contributions to union pension plans, it will affect any similar program, including Social Security, as well.

Social Security is not well positioned to accept such changes. Current projections show that benefits for all retirees could be cut by 27 percent in 2042 unless the funding system is reformed.

Twentieth Century thinking produces two solutions to these examples: federal government bailouts; and increasing the contributions (taxes) paid by the remaining workers. Both are dead-end streets. Even the federal government has finite resources and when the last human driver or worker is replaced by a robot, taxes paid by humans must end.

A far more strategic approach is to tax the robots, that is to say impose a tax equal to the retirement contributions a driver would have made on the robot that replaces him or her. This fundamental change in the focus of taxation, and even private pension fund contributions, is a viable alternative even if it is radical in its appearance. It would have three very significant advantages. It would: