A Place to Start: Save the Cashiers 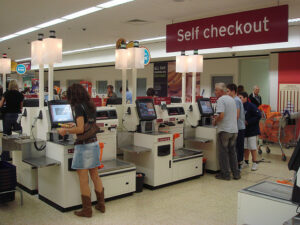 The Washington Post recently published two articles that effectively illustrate the double edged sword of advanced robotics. Ruchir Sharma’s December 2 opinion piece affirming that “Robots won’t kill the workforce …” conveniently, misses more than half of the issue by showing only the wealth production aspects of robotics. Ignoring all but a small class of robots only exaggerated the optimism of Sharma’s conclusions.

Automation and robotics have been  good at replacing human labor for repetitive tasks for a long time; the more repetitive the better. As time has passed, this replacement has evolved from simple controls to ever more complex actions and has vastly increased human productivity. This has led to the well documented divergence between production in the United States and production employment.

Jim Tankersley documented “the rest of the story” on December 8th when he pointed out that the “American Dream is collapsing for young adults” using income mobility research performed by Raj Chetty et al. It is distribution, as enabled by income, that has become the “mine canary” of the dangers posed by the Robot Revolution.

Simply stated, upward mobility, as measured by the ability of children to attain an income greater than that their parents enjoyed, has stalled and is now in reverse. A person born in 1940 had a 90% chance of improving her/ his economic status; one born in 1980 had only a 50% chance.

Even this relatively grim outlook is skewed to the positive by two factors. First, a disproportionate part of the 1980 generation’s success is concentrated in the very lowest incomes so that most Working and Middle class children face greater headwinds than the simple percentage would imply. Second, Chetty specifically considers only “non-institutionalized individuals” and so the impact of mass incarceration, which has grown to almost 2.5 million people according to Wikipedia and disproportionately affects Working and lower-Middle class individuals, is neglected in the above data.

It is exactly the jobs on which the Working and lower-Middle class depend that the current wave of Robots is attacking. The round Kiva “movers” in Amazon’s warehouse are an excellent example of a sophisticated hardware-software combination replacing a large number of semi-skilled personnel (inventory clerks and warehouse workers) with a small number of highly-skilled ones (programmers, database administrators, and robot servicing technicians). Other examples abound: grocery store self-checkouts; Internet enabled search functions that find and dial a phone number; E-ZPass toll takers; ordering kiosks in fast food restaurants; the list goes on and on.

Sharma’s, sadly typical, ad hominem dismissal of “a chorus of neo-Luddites” and others misses the key point that the pre-industrial world of the legendary Ned Ludd had, effectively, infinite pent up demand for basic goods such as clothing. The twin bombshells of the cotton gin and steam loom were the overture to two centuries of unprecedented economic growth.

Increasing consumption requires consumers ready, willing, and able to purchase what is produced.

Consumers of Ned Ludd’s day were ready, willing, and able to purchase what was produced. Few had more than one or two complete suits of clothing so the desire to purchase was enormous. They were generally young and sudden increase in income they were enjoying made them very willing to spend their earnings to improve their life style above the subsistence level.  They were able to do so because automation vastly increased the value of their labor and employers were either willing to share in its bounty, e.g., Henry Ford’s willingness to pay $5 per day, or forced to do so, e.g., labor union actions.

Consumers in the industrialized world are generally not ready today because demand is effectively saturated. Our increasing population of aging consumers, who rely on fixed incomes, is generally not willing to buy enthusiastically. Our increasing population of consumers whose “good paying jobs” – jobs particularly well-suited to individuals with physical, rather than academic, skills on the production line, in the office, at the construction site, and over the road – are casualties of the robotic revolution not able to spend what they cannot earn.

According to the Bureau of Labor Statistics (BLS), cashiers “receive and disburse money, “use electronic scanners, cash registers, or related equipment,” and “may process credit or debit card transactions and validate checks.” They work in banks and grocery stores, big boxes and retail shops, gas stations and nail salons, they take orders and bring food and drink in fast food restaurants throughout our country. There are about three and one half million people working as cashiers in the United States with little variation in the percentage of the workforce they represent nationwide.

These are jobs that are very important to our overall economy because they provide a first step in people’s working life that requires no entry-level education or related work experience hurdle to overcome. Any training required is almost always supplied on-the-job.

The BLS expects cashier employment to grow only by 2 percent in the decade beginning in 2014 because technological advances such as Amazon’s “no cashier required” grocery and increasing automation are reducing employer demand. That increase may well be optimistic because cashier jobs are under increasing attack by the Automation Age.

Allan Sloan of the Washington Post suggests that “President Trump … would probably get greater value for working-class Americans — and for American consumers — by spending some of his time leaning on companies to preserve a huge, threatened class of blue-collar jobs: cashiers. Yes, cashiers.” [The working-class job that Trump could save from automation]

There is a better way to accomplish that goal than “leaning on companies:” apply the payroll taxes of a human being displaced by a machine to the machine – whether it be a grocery scanner, self-serve gas pump, automated teller machine, automated ordering kiosk, or other robotic cashier – when it is deployed. As Bill Gates points out, this will act to slow, but not stop, the Automation Age’s advance giving society time to adapt to the disruption taking place.

“How much tax should be applied to a robot ?” is a complex question.

A human cashier does not help customers non-stop for an entire shift. Sometimes there are no customers in line. People require regular breaks from standing in one place both for physical and psychic needs. People also perform “other duties as assigned” from stocking shelves to tending bar. Importantly, a robot, such as an Automated Teller Machine (ATM), may allow a bank or a gas station to remain available to the very few customers wanting services at odd hours when a human cashier would not be economical.

Just as a journey of 1,000 miles begins with a single step, a solution to this equivalence conundrum may begin with this single suggestion: begin with a robot cashier because it has an exact human equivalent, multiply the robot’s actual working time interacting with a customer times a “human efficiency factor” to allow for breaks and lower workload, set the robot’s hourly taxation as equal to the human’s, and only apply it when the robot is actually “working.”

For example, if the “efficiency factor” is 1.25, a robot actually pumping gas for six hours during a daytime shift would be taxed equally with a human being working eight hours, that is to say the human’s hourly wage times six hours times 1.25 times 15.3%. If the robot only pumped gas for six minutes between 10 PM and 6 AM, it would be taxed as a human being working 8 minutes.

Such a formulation would allow most of robots’ cost benefits to remain because labor cost still drops by at least 84.7%. Economically viable service hours would still rise because the robot’s time would be “free” when it was not serving a customer unlike a human employee who is paid whether customers appear or not.

Reducing that cost benefit would slow, but not stop, the rush to automate. Efficiency and innovation would still be rewarded. Customers would still benefit.

There is another important benefit: cashiers earn an average of, roughly, $21,000 annually, and pay 15.3% of that, or about $3,200, in payroll taxes (that is combined employer and employee Social Security and Medicare taxes). By continuing to collect the payroll taxes from the lost jobs, the national government would avoid losing roughly $11 Billion of the taxes that that fund our national programs for the elderly and disabled, Social Security and Medicare. This would begin to address the structural funding problem facing those programs in the future.

It is worth noting, too, that this would have only limited potential for consumers to “vote with their feet” to avoid paying it. Cashiers tend to be entry level jobs that are not highly skilled nor are they highly paid. The payroll taxes involved are not sufficient to make traveling even a modest distance an attractive alternative.

Location is the key criterion for most businesses that employ cashiers so it is possible for localities and states to protect this type of human job by taxing the robots.